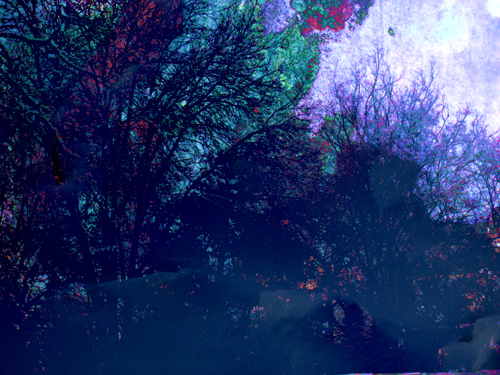 Prompt #1985: Night in the Forest
The Writing Reader

Gunther adjusted his goggles for the fifteenth time. Sweat made the frayed leather slippery. He'd already tightened the things as best he could but it was just too old, too worn-out. One more thing it wouldn't do a bit of good to complain about. He had a lot of those. But there'd be fewer after tonight.

He stopped, swung his lantern about slowly, listening for the tell-tale hiss that would signal the presence of nasty things. At least that was what it was supposed to do, if the old woman hadn't been lying to him back in the free-market. She probably had lied. The lantern was growing hot in his hand despite his glove. too bad he'd lost the hooked iron rod that had come with the thing. He realized what it had been for, now that it would do him no good.

A glint of purple. Gunther held his breath. Waited. Watched. There it was again. The goggles worked,or at least the lenses did. He moved toward the purpleness glimmering from behind some very dark, very big trees. This stretch of forest had lain fallow for generations, even before the last war. Oaks and owls were the rulers of this place ever since the ban on burying the dead out here went into effect. Aside from a few snail-hunters and fungi-gatherers no one bothered coming out here, except for those who knew about the Threshold that led to the Purple Forest.

Gunther pushed through a cluster of ferns. His sleeve snagged on some thorns. He yanked the vine away with a stifled exclamation and only just stopped himself from spraying burning oil from the lamp over the dried-out thing. Just barely. He'd been spending too much time near Red Weeds. Good to know his reflexes had improved. His survival as a forager depended on his ability to avoid clutching tendrils and a hundred other lurking hazards.

Lugging an old campaign chest, a beat-up old trunk full of his dead uncle's war-junk was foolish. More than foolish; it was dangerous. The weight was slowing him down. Tiring him out. It threw off his balance. He wasn't strong enough to carry it much farther. Dragging the musty old thing out here flew in the face of everything he'd had drilled into him as an apprentice forager.

He hated being a forager.

His heart wasn't into it.

The wounds from his last encounter with a swarm of particularly nasty slugs were mostly healed. His left hand was nearly back to normal color and the nails had grown back for the most part. He had another day, maybe two before they'd expect him to go out again.

But Gunther had another idea.

While he was recovering from his run-in with a nest of lace-slugs, his cousins had delivered a battered old trunk to him. they laughingly referred t it as his 'inheritance,' then told him that he had been summarily evicted from his parent's portion of the old house they pretended to share. Since his uncle had fallen prey to the gray pox there were no more directly-related relatives left to make his case or defend his interests, so his cousins took advantage of his injuries and kicked him out.

It was something of a relief, to be free of those conniving idiots. He'd miss having a roof over his head, especially with winter on the way, but if tonight went well enough, he'd have some options going forward.

The goggles slipped. Again. Gunther stopped and set the lantern down on a slightly sloping rock so he could take the goggles off and wipe his face with a rag. He tightened them up as best as he could, but didn't have a pliers. The stupid things were intended to be worn with a helmet anyhow. He considered digging out his uncle's old helmet from the trunk but he didn't want to risk his chance at making a big score. He really, really needed this deal to work. He was gambling everything on it.

Something flew overhead. Big. Dark. Way too quiet. It must be an owl. He was sure it had been an owl. There were a lot of owls in these woods. Everyone knew that.

Goggles back in place, as best as he could manage, Gunther looked for the tell-tale gleam of the threshold that led to the Purple Forest. He still wasn't sure if it was like one of the other known worlds, or if it was something else. His education had been interrupted when his so-called family had pawned him off on the Griswold gang as an apprentice forager. All he knew for certain was that there was a place full of purple trees, where the purple amber was found, and that anyone who wanted to go there just needed to find one of the thresholds that connected to it just like in the picture books he read as a child.

More ferns. A slightly steeper slope. His back ached and was raw in places where the rusty old hardware rubbed through his shirt.

He nearly tumbled down into the depression.

A hand grabbed his arm.

Someone else was here.

He nearly dropped the lantern.

"Steady there boy. No need to go a'tumbling."

Gunther shrugged his arm free from Rother's grip and looked at him in the lantern-light.

He stopped counting at six blades. The man had a zinn-metal left-hand, possibly the whole arm had been replaced. Beard streaked with purple. The man matched the description all right.

"I just wanted to make sure I was dealing with the right person."

"Ah. And have you decided then?"

"I see. Would you care to set it down, give your back a rest?"

"Just set it down boy. Before you collapse under it." Rother chuckled quietly.

Gunther set down the lantern then untied the make-shift straps, mostly old bedding and a couple of raggedy towels, so he could lower the trunk to the ground. It felt good to get it off his back, despite the numerous scratches and bruises. With luck he'd be done with the thing once and for all tonight.

A quick nod and Gunther fished the key out of his belt-pouch, knelt down before the trunk and worked the key into the lock. Snick-snap-click. The old trunk popped open and he began to pull out the well-used gear contained within.

Gunther nearly fell over. All his hard work had been for nothing.

Something moved up in the branches overhead. The owl again? Another one?

"It's not uncommon for a Jelly-Hunter to have lied about their work--half the so-called veterans of the Sewer Militia never served. People have always found a way to avoid the scrutiny of snitches and tattlers during the various occupations. So I'm not at all surprised that your...it was your uncle, wasn't it?"

"Well, I can understand why your uncle might have lied about things, but what I do not understand is how you could set about making a deal with a stranger for a trunk full of gear you obviously never really examined first-hand."

Something swooped down at Gunther's head. He felt it more than he could hear it. He grabbed hold of the first thing he could get into his hands from the trunk and swung it up overhead as hard as he could.

Rother drove a heavy knife into the creature, dragging it away from Gunther in a flurry of frantically flapping wings and...antlers?

Gunther stepped back, away from the tumultuous melee. He looked for the most likely escape route, as he had been trained. Rother's spear leaned against the trunk of the tree they were under. He grabbed the heavy spear in both hands and half-ran, half-shuffled toward the two figures locked in mortal combat. He wasn't used to using a spear in a real fight, but he knew that he just needed to be patient and an opportunity would present itself.

He jammed the point into the breast of the creature. It shrieked. Rother finished it off with a follow-up stab.

Gunther crumpled to the grass.

"Good work boy. We've killed ourselves a peryton; a fairly good-sized one at that."

"Vicious, sneaky beasts. If you hadn't spotted it and smashed it like you did, well, most likely one of us would be dead and the other hard-pressed to survive. A knife is not the best way to kill one of those things, though it does work...if you don't mind getting ripped-up by their talons."

Rother sagged down to his knees next to Gunther. He was bleeding from several lacerations.

"But I'm alive. We're both alive. That counts for quite a lot if you ask me."

"Alive. Yeah. Homeless and destitute except for a box of useless junk."

"Boy. Hear me. You can sit here and whine about whatever it is that is eating you until something shows up to really eat you, or you can pick up your gear and follow me back to camp. Your choice."

"Well, I was going to split the bounty on this foul beast with you, then maybe go have a word with the foreman. Our last Jelly-Hunter quit three weeks ago, but if you're not inclined to try your hand at that there's always amber-scrounging or you could sign-on to be a guard like myself."

Gunther looked at the man kneeling beside him, the blood-spattered contents of his uncle's trunk filled with obscure equipment, the dead peryton.

The goal is to post a brand new piece of flash fiction every Friday. Most flash fiction clocks in at under 1,000 or 2,000 words, but can be as brief as 365 words, 101 words, 140 words, five or six sentences, even just six words. There's a lot of room for experimentation and exploration.
The Friday Flash meme is hosted by the nice people at the Friday Flash website. Sometimes I use the prompts, or I use other prompts, other times I don't use any prompts. It all depends on my mood and the phase of the moon.

You can find out more about the challenge, and what stories are available each Friday by clicking over to the Friday Flash G+ Group..
Stories are listed from Newest to Oldest.
Thanks for taking a look.
2015

Chemistry Lessons (1)
Posted: 8/28/15
Silas and the Patchwerk Girl, a story from Wermspittle.

It's a beautiful, sunny day and I've just returned from a pleasant walk out amongst the towering oaks and lesser trees of one of the local parks. Had a shot of pumpkin syrup in my coffee while I was out. Warm sun and a cool breeze, the leaves are just beginning to change and we're on the very threshold of October. It's good to be alive.

This past weekend, on Sunday, we went off to attend the Second Foundation Group's discussion of Mr. Arthur Machen. We met Mr. Till from the FATE SF & Everwayan  blogs for brunch there at Merlin's Rest, a Britophile-type pub. Brunch was pretty decent all in all, and I was happy to sample Strongbow Cider once and for all. Wonderful stuff. Especially for breakfast. Yum.

In regards to Mr. Machen...

"Sorcery and sanctity...these are the only realities. Each is an ecstasy, a withdrawal from the common life."
...I've read a great deal of his work, especially his weird fiction, some of his essays, The Hill of Dre…
Read more