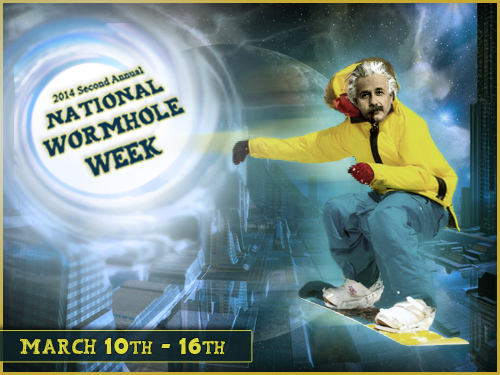 The Second Annual National Wormhole Week or Wormfest 2014 is a fun blog-hop co-hosted by Alex J. Cavanaugh, Stephen Tremp, and L. Diane Wolf. Last year we were asked where we would go and what we would do if we could slip back in time via a wormhole. This year we've been asked to name one thing where science advances mankind, and one where technology with unforeseen consequences will go too far and set mankind back. What a great theme.


One Step Forward...
Life Extension. Being able to extend a person's active, productive life-span by a few more years or perhaps even decades or centuries would give those who receive this gift more time to do great things. Instead of slowly, inexorably crumbling into dementia and oblivion, the greatest minds of each generation could go through an extended personal renaissance. If it became possible to extend lifespans past the century-mark, to live for multiple centuries or even longer, it would transform everything. The so-called 'Long view' might become far more important. There ought to be time enough to tackle really big projects, to conduct very long-term research, to extend human civilization out into the solar system and beyond...

Two Steps Back...
It's easy to imagine the classic SciFi scenario of long-lived near-immortal scientist-philosopher-adventurers on a grand mission to build a bright, shiny future, you know, Civilization with a capital 'C,' but it's probably another still-born fantasy born of the First Great Depression's pulps and the American Renaissance following WWII. Just like silver lame and jet-packs...I have my doubts that we'll see it outside of cartoons or commercials.

However, if only for the sake of a thought experiment, we were to consider what it would be like for a small group of self-chosen technocratic elites to have a monopoly on the technology of life extension...well...I still doubt we'd ever get our jet-packs. What we would get, most likely, would be one of the most oppressive, restrictive, totalitarian regimes in human history. Not everyone would 'deserve' or be 'entitled' to having their life extended. There would have to be standards. someone would have to control access to this technology and thus they would become the arbiters of who lives long and who dies early. Whomever formed this inner circle, cabal of the wise, benevolent council of magnanimity or whatever they called it would get to decide what things mattered, what merited the reward of long life, and what things should be allowed to die off or die out. Enlightened scientists, like those uptight white guys in Fifties SciFi are no match for scheming politicians or would-be neo-Mandarin Bureaucrats. Such a society might not value innovation nearly as much as it would appreciate and demand conformity, loyalty, obedience. A bureaucracy that has been allowed to grown-up over the course of decades tends to distort everything it touches. Case in point, look at how different the United States of America has become from when it first started out. That was only a couple of centuries and change. Good, bad or ugly; whatever your opinion on the way things are today, they have changed drastically. Imagine what a 'free market' system manipulated by one-percenters who manage to live for multiple centuries might develop into. It makes me think of Dickens on crack. But let's suppose for a moment that somehow, possibly via the intervention of the Internet perhaps, the technology behind life extension escaped the greedy clutches of the elites and spilled out into the general populace. If anything, that's a far scarier scenario.

People living more than five years past their retirement has already seriously undermined and upset the financial system built-up around pensions, benefits and so on. People already are living multiple decades past the point where the actuaries calculated they would drop out of the system, expire, die. Social Security has never been funded sufficiently for anyone to live for very long while receiving benefits, certainly not thirty or more years. Imagine what would happen if more than a few people gained the ability to live well into a third or fourth century? How would we reconcile the established financial and economic systems with the new reality? Is it even possible? Talk about a Pandora's Box. We're already seeing some pretty radical transformations and developments from people in developed countries living well into their seventies, eighties and nineties. What happens when/if Joe Six-Pack can reasonably expect to live well into their third century or more? How do we address the needs of each generation without causing it all to meltdown into a terrible mess?

Can Capitalism manage things under these new circumstances, or will it give way to some form of Socialism, or will a third alternative arise?

Will Felons lose their right to life extension? Should they?

How will we as a society deal with people raising a second or third or fourth family in their second hundred years of life?

What will happen in terms of legal adulthood--age of consent, minimum age to drink, drive or vote?

People tend to grow more conservative the older they get. How conservative could someone coming into their fourth century get? The AARP is now the single largest voting block in the USA. If we end up re-tooling retirement, say pushing the age upward or dropping chronological age altogether and instead base retirement upon personal health, fitness, cognition or functionality, for the sake of argument, what happens to this massive political juggernaut? If people begin to live multiple centuries, are they going to be more likely to become generationally stratified? Will there be multiple, hierarchically-oriented generation gaps in-between each block of fifty years or so?

So many questions and so much potential for conflict and opinion...and exploration through fiction, now, before it's one more fact of life...

I'd better get back to writing.