- March 22, 2012
I was sorting through some older stuff, getting things cleared-out, finished, sent-off, or otherwise DONE, when I rediscovered this piece that was inspired by something I read at the Burning Zeppelin Experience blog a while back, before things got insanely busy. I originally dealt with this spontaneous bit of weird prose in a post to Old School Heretic: Results of an Experiment in Structured Writing.  (Thanks Mark!)

Re-reading this piece, I believe that this was the essential germ-spark that set Wermspittle into motion.

It was in the midst of a daemonical plague. A wretched, feverish pollution that brought about hundreds of freakish mis-births that wriggled and squirmed out from the victim's flesh regardless of their gender or anatomy or even whether they still lived. Writhing, tumorous things formed horribly deformed pustule-sacs that reared outwards from any and every bit of flesh exposed to the fetid miasma that wafted sullenly from the sewers. They tried to close-off the sewers. Then they tried to close off the lower districts.

It didn't do any good.

Nothing could stop the hellishly infectious plague. It was a devilish pox of fertility.

That is why the people flocked to the once proscribed and interdicted shrine of The Barren One, to seek some consolation and comfort from the Mother of Desolation, She of the Sterile Womb, the patient Empress of Wastelands.

Crookedly. Cruelly. For She had finally won after many, many long hard years... 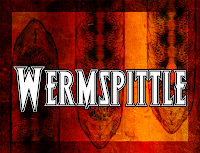 This snippet of fiction sets up a central underlying conflict going on behind the scenes in Wermspittle; barrenness and fertility. A plague of rampant fertility and fecundity is raging through some of the regions, while a plague of sterility and barrenness has settled upon the Low Lands surrounding Wermspittle proper. I won't even mention the third major plague, nor the lesser illnesses that are making themselves felt or known within the Refugee populations streaming into the city...at least not yet. This strange interplay, this internecine battle between two plague-manifested forces of unnature...that's driving a lot of what's currently in-the-works for this project. There's definitely more flash fiction coming in the weeks ahead...
Wermspittle